Vienna, 1900. Time of the Austro-Hungarian regime. Everyday life is constituted by honour, pride, duels, suppressed individuality and outworn hierarchies. With World War I already on the doorstep and antisemitism becoming socially acceptable, the spirit of the German Empire is rapidly crumbling. In this troubled times, Lieutenant Gustl, a young and disoriented k. & k. officer, is deeply offended in his honor: He was called a stupid boy by a baker (Nicholas Ofzarek).

Since his opponent isn’t a member of the military, and therefore the conflict cannot be resolved by a duel, there is only one way to restore his honour: suicide.

Witness Lieutenant Gustl’s stream of consciousness as he is drifting through a sleepless night in search for a viable escape. But as the day breaks, there comes the hour of truth.

Of course Lieutenant Gustl is more than a nostalgic reminiscence of long gone days. A hundred years later we find ourselves in a quite familiar situation: In desperate need to frame our own identity, we are longing for authenticity and a binding reference system in face of the overwhelming possibilities of the present. And in search for orientation parts of our society are calling for border walls and identifiable enemies.

WITH VIRTUAL REALITY IN THE CENTER OF THE INNER MONOLOGUE

The young man’s existential conflict – originally composed as an internal monologue –, provides an ideal template to be told by means of virtual reality. Theater, film director and author Sebastian Brauneis embarks on a journey into the digital space with a top-class ensemble of Austrian film and theater actors. In order to tell his protagonist’s story, he pairs the power of stagecraft with cinematic and digital storytelling, while the original monologue is divided between Gustl (Lukas Watzl) and a shadowy character (Christoph Radakovits) who eventually turns out as his alter ego.

“Inside Lieutenant Gustl” stands for serious culture mixed with entertainment.

We understand VR as an innovative way inside the narrative sphere of theater, literature  and film.

That is why we produce literature and plays as an immersive multimedia experience. 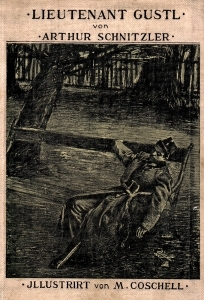 In 1900, Arthur Schnitzler wrote the novella Lieutenant Gustl (english: “None But The Brave”), a pioneering work in the field of literature.

Lieutenant Gustl’s inner monologue, which makes the character’s turmoil observable from an internal perspective, marks a turning point in the history of narration, and draws us directly into the protagonist’s stream of consciousness.

Lieutenant Gustl first appears in the Christmas edition of the Viennese newspaper “Neue Freien Presse” in 1900 and is published 1901 by S. Fischer Verlag Berlin with drawings by M. Coschell. 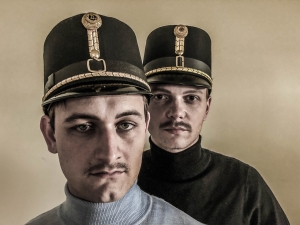 THE STAGING BY SEBASTIAN BRAUNEIS

Inside Lieutenant Gustl takes an approach to digital reality through the medium of theater. The specific qualities of cinematic production become connected with the expressive forms of theater in order to contribute to the new language of immersive storytelling, to experiment with its application and to test its potential.

In our project we are decisively experimenting with the potential of literally taking on different perspectives: What happens in the head of the young lieutenant in a way reflects the contemporary conflicts within Central Europe. As individuals we want to revolt, are desperate to feel meaningful. But what means do we have – and with which concepts of ‘the enemy’ do we operate?

In Sebastian Brauneis’ dramatization of Schnitzler’s story, the main character is played by two actors at once, each representing different parts of Gustl’s personality: Lukas Watzl as ‘Gustl’ and Christoph Radakovits as his ‘shadow’. The ‘baker’ – the civilian that motivates the entire action – is embodied by Nicholas Ofczarek, who also acts as the waiter that resolves the action in the end.

We may request cookies to be set on your device. We use cookies to let us know when you visit our websites, how you interact with us, to enrich your user experience, and to customize your relationship with our website.

Click on the different category headings to find out more. You can also change some of your preferences. Note that blocking some types of cookies may impact your experience on our websites and the services we are able to offer.

These cookies are strictly necessary to provide you with services available through our website and to use some of its features.

Because these cookies are strictly necessary to deliver the website, you cannot refuse them without impacting how our site functions. You can block or delete them by changing your browser settings and force blocking all cookies on this website.

These cookies collect information that is used either in aggregate form to help us understand how our website is being used or how effective our marketing campaigns are, or to help us customize our website and application for you in order to enhance your experience.

If you do not want that we track your visist to our site you can disable tracking in your browser here:

We also use different external services like Google Webfonts, Google Maps and external Video providers. Since these providers may collect personal data like your IP address we allow you to block them here. Please be aware that this might heavily reduce the functionality and appearance of our site. Changes will take effect once you reload the page.